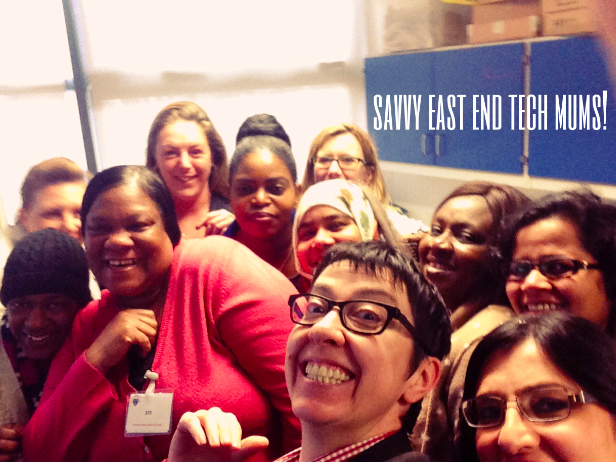 “What’s the use of social media?” That wasn’t a sarcastic question, that I pondered this morning, it was a real one. Sue (@Dr_Black) had sent a message from her sickbed asking if any of her friends would be able to run her social media class that morning, in East London, to local mums wanting to improve their tech skills.

Given that I live 20 minutes walk from the venue (Bishop Challoner Catholic School on Commercial Road), I thought about saying yes, as I sipped my coffee, but not before I asked myself “what’s the use of social media?” and “what’s the use of social media to this group of East End mums?” Clearly, there are numerous answers to the first question and I could only guess at how these women might answer the second. But what did strike me, a few minutes after saying: “yes, I’ll do it, Sue”, is that they are all already clued up on social networks. These women make all sorts of magic happen in their homes, at work and in their local community because, by enlarge, that’s what women all over the world do – they keep it all going.

With such short notice, I started the class with this in mind and gave the example of how my siblings and I had bought my mum a computer and got her on Facebook (she’s in her 80s). We all thought, ignorantly, that mum would struggle to grasp social media. How daft of us; mum had grown up in Liverpool in the 1930s, one of a large Irish family. She’d watched her mum make things work by negotiating, bartering, helping, charming, sharing and discovering all she needed through her daily chats across the back yard washing lines, or in the street, the church or at the corner shop. So had my mum when she brought up me and my four siblings and so were all of these women – on a daily basis. Mum grasped social media, it was innate and all of the women in front of me grasped it too.

We moved on to how they might use social media to gather more voices to join their causes, or help in their community. Most used Facebook a little and one had tried Twitter. Ann Marie (one of the mums) brought up the breast cancer awareness drive on Facebook and how women were taking make-up free ‘selfies’ to promote the cause. Suddenly the room buzzed with ideas of other causes and how using social media might help them bring issues and ideas to the fore.

While I talked with the women, we had Sue’s Twitter account projected on a wall at the front of the classroom. Everyone laughed at how Sue was “at home sick” yet still busy Tweeting away with everyone, including me and also Alison Moyet. I pointed out that I had no doubt that Sue would manage to tweet from her own coffin. Having all met Sue, they promptly agreed. [You all know me too well 😉 – Sue]

We all played a little, taking an Ellen DeGeneres Oscar selfie and Tweeting it. The power of this network was quickly revealed when the image was re-Tweeted eight or so times in under a minute, to an audience exceeding thousands.

The concept of social media was straightforward to everyone in the room, the only thing they really lacked was some of the language and a little of the working detail; what’s that sign (hashtag), how is it used, what are characters, what’s a direct message and so on.

The hour was too short and probably taught me much more than it taught the participants: more often than not, the barrier to entry is feeling that we don’t understand, when in actual fact we do, it’s just that the language is a little different.

Vic Roberts is a business consultant and @vertical_cat on Twitter